Ness was the creation of a Liverpool cotton merchant Arthur Kilpin Bulley, who in 1898 created a horticultural treasure. Bulley was a pioneering plantsman who was passionate about plants and founded the garden on the Wirral due to its unique microclimate and spectacular aspect. He was particularly interested in the very many new species being discovered in the eastern Himalayas and believed that many could become established in cultivation in Britain. He founded the company Bees Seed Ltd and launched the careers of the plant collectors George Forrest, Frank Kingdon Ward and Reginald Farrer with the aim of introducing new garden worthy plants. Many garden worthy plants and many new species were introduced including for the first time in Europe. Bulley were especially interested in hardy alpines such as Primula bulleyana, Primula florindae, and Gentiana sino-ornata, as well as many woody species including Sorbus pseudohupehensis, and Pieris formosa var. forrestii.

Ness was presented to the University of Liverpool by Bulley's daughter in 1948 and has continued to develop as a botanic garden, public amenity, tourist attraction and teaching garden, while still retaining the 'feel' of a private garden. Its unique aspect overlooking the Dee Estuary and continued passion for plants has continued to improve the gardens year on year. It is holder of the NCCPG National Collection of Sorbus, with over 300 types found throughout the gardens and also has one of the largest collections of Birch and Alder in the country. It also holds a huge range of other interesting and rare plants including many from western China and Tibet. The structure of the garden combines beautiful formal areas including herbaceous borders, a Mediterranean garden, pine wood and rhododendron border, potager, rock garden and terraces. More informal outer areas includes a wildflower meadow and arboretum of wild collected species. It is simply a plantsman’s paradise.

There is no end of things to see whatever the season, and your visit can be as short or as long as it suits. Ness runs a number of events, courses and talks for all ages throughout the year. The garden season starts with snowdrops, followed by a spring paradise of bulbs, Rhododendrons and Camellia. In summer the garden is spectacular for herbaceous and Mediterranean plants, and the autumn it is dripping in fruits and berries. For those who fall in love with the gardens, by joining the Friends of Ness gardens, you can have free access to the garden all year round. Please check the website for more information. 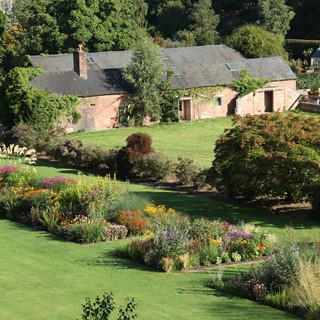